In 1984 VERDES took their first steps in North America with the establishment of a clay preparation line in Selma, AL.  Prior to that, VERDES supplied only a few scattered primary crushers and roller mills to Boral plants in Marshall TX, Gleason TN, and Phenix City, AL.  Most all of these early crushers are still in operation some 35 years later, many of which have been relocated throughout the years. 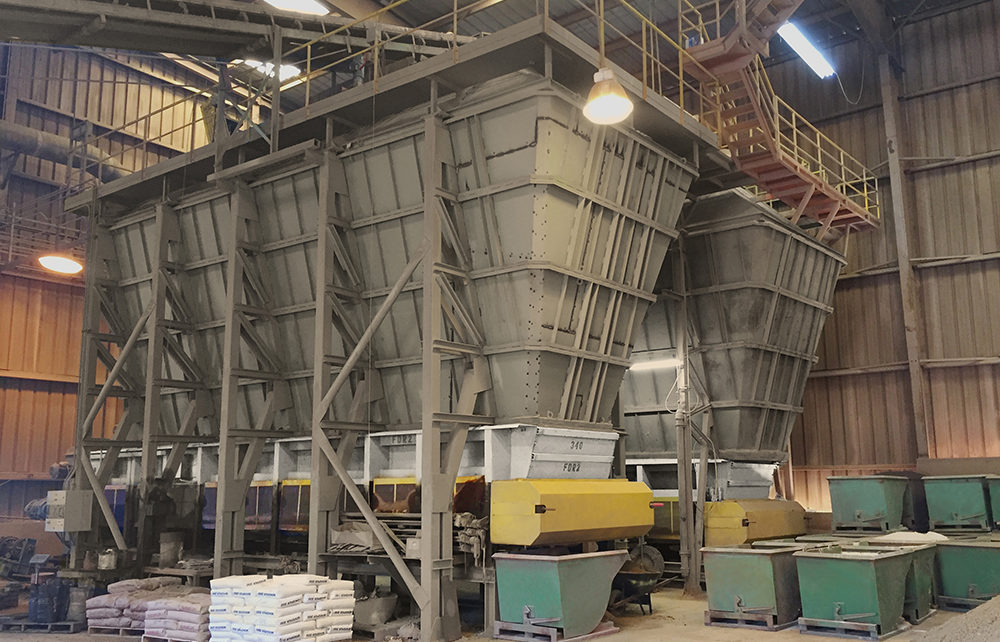 Henry Brick in Selma was the first major project awarded to the Spanish company. The grinding process was accomplished through use of a primary crusher, disintegrator, and roller mills.  VERDES also supplied several box feeders and a model 046C double shaft mixer.  Still in operation today, the line was complemented with several additional model 029E box feeders.  The first feeder was installed in 2000 followed by a second identical unit in 2004, set in parallel, to duplicate the storage buffer capacity. The hoppers above these feeders are 10 meters long x 2 meters wide, totalling a capacity around 450 tons of ground material.

Additionally, in the late 1980’s VERDES supplied equipment through the old AGEMAC company, to Brampton Brick in Ontario, Canada and to Glen Gery Brick in Iberia, OH.  Both of these plants were green field turnkey projects. To this day the Glen Gery plant still combines production of moulded and extruded bricks. Among several machines delivered there, the original VERDES model 059D5 Monobloc de-airing extruder is still in operation.

Another milestone in VERDES’ history was the sales agency agreement reached with MECO (The Manufacturers Equipment Co) in 2001 to represent VERDES in the US and Canada.  The presence and reputation of MECO in the brick industry was crucial to gain new projects, the first being to Boral Brick in Union City, OK.

Boral Brick trusted the quality of VERDES and the engineering expertise of MECO to install one 16 meter long reclaimer designed to automatically deliver ground material from their storage room. Coincidence or not, VERDES had made a presentation during the 2004 Clemson Brick Forum on the main topic of the handling of stockpiles and storage rooms. This first reclaimer was installed in 2005 in Union City, OK. 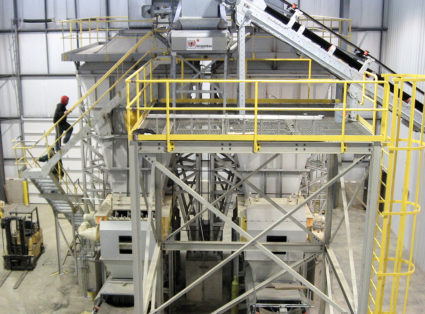 Shortly thereafter, MECO was awarded a green field grinding room project at Bowerston Shale Co., which is located in Bowerston, OH, in 2006.  VERDES supplied a combination of metal slat apron feeders and rubber belt feeders, each 1.5 meters wide x 5 meters long. The equipment was delivered in 2006 with engineering, erection, and installation by MECO.

One primary feeder VERDES 028P discharges 40 TPH of raw clay and shale to the primary crusher. The VERDES primary hopper is filled by direct dump from quarry trucks with mined clay & shale sized 24 inches and smaller.

In the grinding room, two Verdes model 028-P/5 m metal slat apron feeders with hoppers dose primary crushed clay and shale to screening and secondary crushing.  One feeder is dedicated to shale storage, the other to clay.  The four sheet storage hoppers are filled by a reversible conveyor with 4” minus clay or shale.

Two fine material model 028-BPD/5 m rubber belt feeders provide 40 TPH of secondary crushed clay and shale to production.  One feeder is dedicated to shale storage, with the other to clay.  The four sheet storage hoppers are filled with 10 mesh product as a buffer supply to the pug mill. 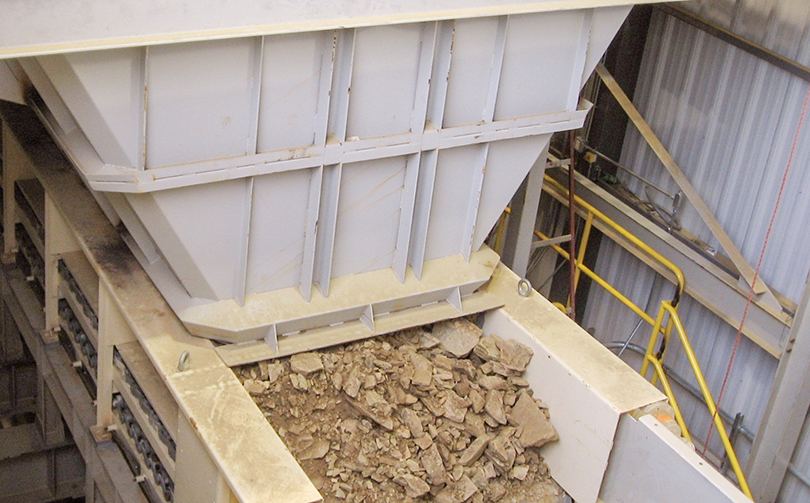 Ron Hartline, Plant Superintendent at Bowerston Shale, had this to say about his machines; “Verdes produces reliable and well constructed equipment. The low maintenance and operational cost add to the overall quality and value of their products”. 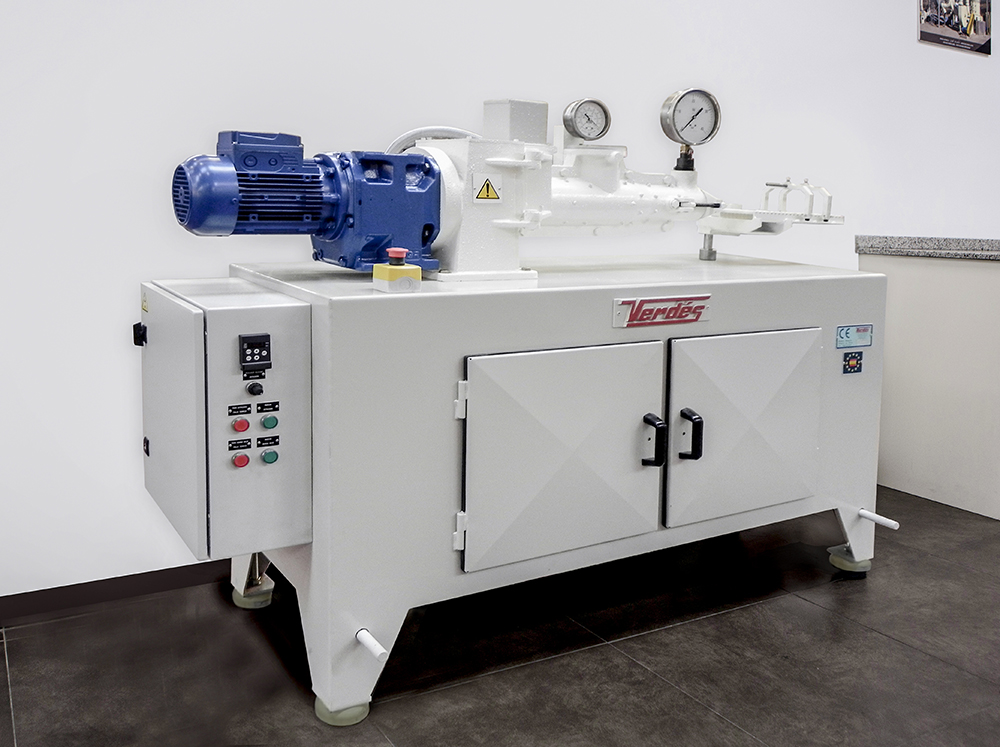 Additionally, in 2006 VERDES received an order from U.S. Tile for several machines for their lab facilities. Among them one unit each hammer mill 030, roller mill 080, batch mixer 040 and one unit 050C de-airing extruder.

In 2007 Ladrillera Santa Clara (Nuevo León, México) trusted VERDES to supply grinding and storage equipment to their new plant near Monterrey, Mexico. An 18.3 meter long reclaimer automatically controls a 130 meter long storage/souring room designed to hold more than two weeks of production.  VERDES also supplied a model 046S double shaft mixer, which is among the largest ever built by any machine maker.  It is capable of delivering as much as 200 ton/hr.

VERDES’ largest project in North America was Boral Brick’s new plant in Terre Haute, IN. A couple of visits to Spain convinced the Boral technical team that VERDES had both the technological expertise and machine durability that they were looking for in their preparation plant.  The first machine order was placed in 2007 which was specific to different sections of this new project.

Primary crushing is housed in a separate area, external to the main building.  The process begins at a VERDES metal slat apron feeder receiving raw material from dump trucks as large as 600 mm (approximately 24 in).

From the feeder, material is conveyed to a model 118DTE primary crusher, ensuring that 100% of the material size is below 80 mm before it is transferred to the grinding room. 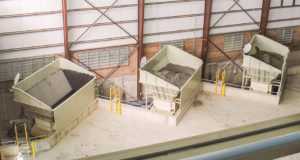 The main building houses concrete bunkers where the different pre-crushed materials are stored.  A front-end loader supplies three VERDES model 028BPD6 rubber belt feeders, each 1.5 meters wide x 6 meters long.  Feeders are driven by frequency inverters to accurately dose and blend onto a single conveyor transferring the preset proportion of each clay to the grinding plant.

Once crushed and screened, the material is conveyed to a model 046C double shaft mixer, where water is added and blending is performed for a consistent final recipe. A key feature of VERDES’ double shaft mixer is the aligned “knife to knife” effect.

The pressure created between mixer knives, with each side rotating toward the other, increases the cohesion of the mix resulting in better homogenization of the material.  From the double shaft mixer the final blend is delivered to the storage room from a travelling shuttle conveyor.

The storage room is divided into three concrete bunkers holding different recipes.  A PLC located in the reclaimer control board automatically programs the machine to move into the correct location and position on the pile.  The reclaimer automatically starts and stops, controlled by an electric signal received from the buffer feeder located in the shaping area.  The Reclaimer is driven by frequency inverters controlling the speed of the bucket chain pulling material from the storage pile, as well as the travelling speed working laterally along the pile or from one bunker to another.

Although the economic downturn that began in 2008 in the US brick industry slowed the progress of new machine sales, VERDES along with their sales agent MECO have continued to support customer’s new equipment and parts needs from Spain and consignment stock in Ohio.  Verdes and MECO enjoy a rock solid reputation in the US brick industry, with each company well positioned to once again support new projects and improve existing dated grinding operations.  VERDES machines are rugged, heavy duty, and built to last with 40 years in the market to prove it.  Check out their newly designed series of extruders, mixers, crushers, and feeders at www.verdes.com or visit the MECO website at www.mecoservices.com for more information.